Home L.A. History The Northridge Earthquake: “Like a Punch Delivered from Below” 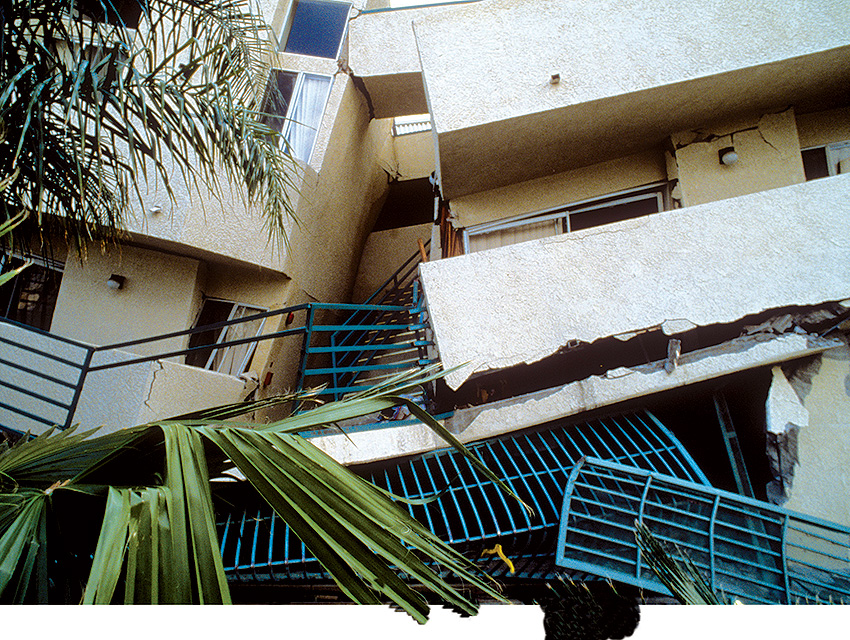 It was a beleaguered city that welcomed the Martin Luther King Jr. holiday weekend of 1994. Since the start of the decade, Los Angeles had been declared part of a federal disaster area five times because of floods, brushfires, and civil unrest. The death toll and devastation following the 1992 acquittal of the four LAPD officers accused of beating Rodney King had been worse than those of the riots that overtook Chicago after MLK’s assassination. Only the tectonic plates beneath L.A.’s surface had remained calm. Or so it seemed.

At 4:30 a.m. on Monday, January 17, the Northridge earthquake struck. The up-to-30-second jolt killed 57 people, injured thousands more, destroyed houses and apartment buildings, and severed L.A.’s and the country’s most crucial transportation artery, the Interstate 10. The temblor, which caused more than $40 billion in damage, became the costliest natural disaster in U.S. history, a designation it would hold until Hurricane Katrina hit in 2005.

As director of California’s Office of Emergency Services, Richard Andrews led the state’s relief and recovery efforts. He authorized the California National Guard to set up emergency tent cities, sent hundreds of engineers to survey tens of thousands of damaged structures, arranged the removal of hundreds of thousands of tons of rubble, secured $13 billion in federal funds, and oversaw the processing of more than 680,000 applications for relief. Within six weeks his office had delivered assistance to more disaster victims than the Federal Emergency Management Agency had served in the six months after Hurricane Andrew battered Florida and Louisiana in 1992. Because of decisions the emergency services director made the morning of the disaster, the section of the I-10 that was broken in two places along the Santa Monica Freeway was reopened in less than 90 days—two-and-a-half months ahead of schedule.

The response to the Northridge quake became a model for other states. California’s government acquired a reputation for its focus and competence—an image that would fade too soon with the rolling blackouts, the recall election, and the budgetary fiascos of the ensuing years.

Andrews left the office in 1998. He has since acted as a consultant on disaster response and recovery for risk management companies and the World Bank. He also became a member of the U.S. Department of Homeland Security’s Advisory Council and served as Governor Arnold Schwarzenegger’s homeland security adviser.

As L.A. marks the 20th anniversary of the Northridge quake. we asked Andrews, now 72, to reflect on both the devastation and the shared sense of purpose that was so different from the recriminations that marked the aftermath of the 1992 riots. He also talked about a potentially troubling future in which California may prove vulnerable when the next big one comes. Governor Pete Wilson (above, left) with Richard Andrews at the interchange of the I-5 and Highway 14

My wife and five-year-old son were in Sacramento with me for the holiday weekend. I lived in the state capital because of my job. But we maintained our residence in Southern California, out in Redlands, because my wife was deputy superintendent of the Redlands Unified School District. We were asleep when the phone rang. Ironically it was my wife’s boss. “Hey,” he told me, “we’re just having a big earthquake down here.” It was a minute or two after the quake, and I had yet to receive notification from anybody at my office. I left for work, and I don’t think I saw my family for the next two- and-a-half weeks.

Arriving at OES headquarters, I realized I was among the first ones there. Maybe six months before, we had purchased a new earthquake alert system that was supposed to be the state’s link to the seismic networks at Caltech and the U.S. Geological Survey in Menlo Park; we could then quickly get a readout estimating an earthquake’s magnitude and location. But we had not had a large-magnitude earthquake since the warning system was installed. We didn’t realize that when the magnitude reached something like 6.0 or above, it would trigger this piercing siren sound. It was deafening. We couldn’t figure out how to turn it off. Finally I tried hitting the escape key, and the noise stopped. It was a rather traumatic start to the day.

In short order the cabinet secretary in Governor Pete Wilson’s  office patched me through to Wilson at his Sacramento residence. He was awake. The water in his swimming pool was sloshing out, so he knew something was going on. I then called James Lee Witt, who was the director of FEMA, and asked him to put all of the national search-and-rescue teams on alert for possible deployment. This was probably in the first hour or so. We really had no idea how extensive the damage was, and it was just starting to get light.

I took a turboprop plane with Wilson and the head of the California Highway Patrol from Sacramento to Los Angeles. We knew there had been damage to the freeway system, so on the flight down we were poring over maps of Southern California and trying to locate the places where we knew there would be freeway interruptions. We began talking about the strategy that we would eventually employ later that day of fast-tracking contracts to get the debris cleared and the repair work under way on the freeways. That proved to be one of the smartest things we did, because not only did it shorten dramatically the time to get the freeways back up and running, it also sent the public a signal that somebody was in charge and taking action quickly to address some of the major problems.

After we landed in L.A., we boarded an LAPD helicopter and took an aerial tour. We saw the damage to the Nordstrom out in Canoga Park, the freeway collapse at the 14/I-5 interchange and along the I-10 toward Santa Monica.