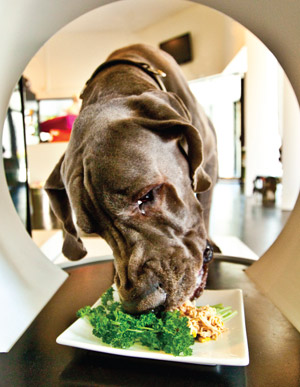 Janene Zakrajsek’s ancestors were carnivores. “I’m Slovenian,” says the co-owner, with husband Robert Gaudio, of Pussy & Pooch Pethouse and Pawbar (564 S. Main St., downtown, 213-438-0900; 4818 E. 2nd St., Long Beach). “My people were slayers, and so I eat a lot of meat.” Zakrajsek looks at a steak dinner as an evolutionary no-brainer. Not surprisingly she has similar thoughts about dinner for her Jack Russell, Jackson: “His ancestors never microwaved a rabbit after killing it, which is why we think kibble is the worst thing to feed him and raw food the best.” If you really want to go nuts, consider the various philosophies—all fiercely held—about dog food. There’s organic, vegetarian, holistic, vegan, raw, and dehydrated. Kibble comes in blueberry, salmon, and beet flavors; there are soups, stews, yogurts, beers, and sushi. No long-range scientific studies exist that contrast the benefits of different diets. That, however, hasn’t stopped pet owners from arguing over the dinner bowl. Vegans believe that vegan kibble improves skin health. Raw food enthusiasts claim that cooked kibble is a biological disaster, and companies like Nestlé Purina PetCare assert that raw diets lack calcium and are potentially hazardous to an animal’s well-being. To introduce raw food to four-legged patrons, Zakrajsek and Gaudio decided to install a bar in their boutique. On the menu are raw burgers, raw soups, a bowl of raw meat and vegetables. Pawbar has turned out to be no different from a Hollywood nightclub. “Things get sloppier as the night progresses,” says Gaudio. “Water gets spilled, the place gets trashed, and humping does go on.” Fights break out; patrons get ejected. “We had a pit bull that tried to make a snack out of a Chihuahua one night,” says Zakrajsek. “It was quite unfortunate” but, technically, a proper raw meal.