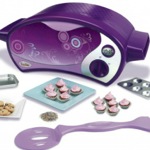 Eighth-grader McKenna Pope took to the interwebs a few weeks ago to launch a campaign to get Hasbro to make an Easy-Bake Oven that boys and girls could play with. When her younger brother, Gavyn, asked for one as a Christmas present, McKenna and her parents found it “quite appalling” that the machines only featured girls in ads and on the packaging, with decidedly “girly” color schemes of pink and purple.

We’d reached out and got a statement from Hasbro last week, which pointed out that they had made “gender-neutral” versions in the past, but that market research showed that “the primary interest in the Easy-Bake Oven comes from girls.” Regardless, they invited McKenna and her family to Hasbro HQ to meet with the Easy-Bake team and discuss their concerns.

After making the trip to Pawtucket, RI, the family was shown a black, blue, and silver prototype that Hasbro has been developing for the past 18 months. McKenna tells the LA Times: “I think that they really met most or even all of what I wanted them to do, and they really amazed me.” She also reported that Gavyn thought the preliminary design was “awesome.” Hasbro says that they will be unveiling the design at an industry show in February, and consumers can expect to see it on shelves come summer 2013. And yes, there will be boys in the commercials.