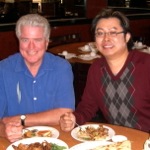 “Pig ear Jell-O?!” That was the late and amazing Huell Howser’s reaction delivered in his signature, excitable, earnest Tennessean twang when I explained to him, on-camera, the process of making cold Sichuan pig ears. This Chinese delicacy is served cold and congeals during the chilling process causing the stack of pig ears to form into a block of gelatin. When I described it as “pig ear Jell-O,” he bellowed the phrase back to me as if I just explained the meaning of the cosmos—a Huell Howser “Eureka!” moment. And if you’re a fan of the man, you know he’s had many of those throughout the years of discovering and sharing California’s Gold with us.

At the point of our pig ear meeting back in 2007, he’d already done decades of television, and yet he still was still genuine enthused at my description. In an age when we salute snark and fetishize the cynical, when Tony Bourdain is a sex symbol because of his bad boy attitude, Huell Howser is the man who fell to Earth. He’s E.T. pondering a Speak & Spell. Everything was fascinating to him, including even cold Sichuan pig ear. But he was also ultimately of this Earth… for the common person… the anti-celebrity celebrity.

Grace Yuan, the owner of Chung King Restaurant in Monterey Park where we ate those pig ears, spoke very poor English. Naturally, Huell wanted to speak directly to her and not through me as a translator. (Although there were moments when my translation skills were necessary.) He never wanted to have a barrier between him and his subjects; that was not his thing. Whenever appropriate, he’d touch the person’s shoulder or arm for that extra contact and familiarity. This is why he preferred his famous handheld mic for interviewing on the field rather than using wireless lapel mics, for example. He was patient with Grace’s limited English and we never witnessed his big grin wane for a second. And even though Huell half-jokingly stated that he’d left Tennessee so he didn’t have to eat things like pig ears, the moment he tasted them, he was won over by the flavor and went back for seconds. It was a segment of time I am happy to be able to replay over and over again because I have the episode on DVD with the compliments of Huell Howser. He made sure all his guests had copies without having to request them. And as improbable as it may seem due to his packed schedule, Huell even personally called his guests—myself included (a delightful surprise to be sure)—to remind them of when their episodes would air, even as a rerun.

My first meeting with Huell Howser was at the Dorothy Chandler Pavilion during the annual L.A. County Holiday Celebration. He was playing co-host for the KCET live broadcast. My friends and I stalked and cornered him for a photo. It turns out we didn’t need to stalk or corner the man at all; Huell was willing to give us as much time as he had during his break. We never got the impression that we were bothering him and he never rushed us along.

My first appearance on his show Visiting with Huell Howser was a nerve-wracking one. He invited me to speak about halal food. I didn’t know very much about halal at the time. All I knew was that it’s the Muslim version of kosher. My friend Shahed Amanullah, co-founder of Zabihah.com—a halal food finder Web site—was the person who inspired Huell to do a show on the subject when he heard him on the KCRW Good Food Show. But Shahed lived in Austin, Texas back then and since I was connected to Shahed, Huell contacted me to do the episode as a food writer. I recall cramming everything I could learn about halal food (prepared according to Islamic law) in the days leading up to my appearance. Shahed helped me like a tutor prepping his student for finals. When I met Huell at the first location—Payless International Market—he caught me frantically scanning my notes. He approached me and wryly observed, “Are those your crib notes?”

I also remember him remarking during a phone call prior to the halal shoot, “You ain’t Muslim and I ain’t Muslim. Maybe we should get someone who’s Muslim to join us.” I don’t bring this up to point out that Huell was the master of stating the obvious, but to highlight his sensitivity to the audience, specifically the Islamic audience of whose dietary practices we would be discussing. Eventually he did bring on Edina Lekovic, a well-known spokesperson for the American Muslim community, “to keep us on the straight and narrow” as he put it.

But it was that particular episode when I realized Huell Howser’s real connection with people of all cultures, races, ages and demographics. He was stopped more times than I can remember by people on the street, in the store, and at the restaurant. While I viewed it as somebody interrupting the shot, he saw it as an opportunity to talk to a real person of the community. He never broke stride as he went from speaking with me to pointing out a grocery item to chatting it up with a random customer. This was the real Huell at work. The Huell that I found so difficult to believe to be real. In this day and age when tragic news is rampant. When small events don’t matter. When regular folks doing regular things are far from newsworthy… Huell listened to them all like a spiritual leader, the Dalai Lama of the Golden State. I will never forget the looks on people’s faces when they said hi to him and he stopped everything to say hi back. It was as if somebody had only now heard them for the first time in their lives. That is the power of Huell Howser. And that is beyond amazing.