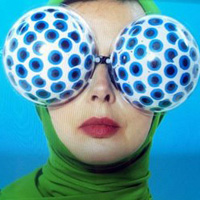 Had you already developed the concept?
No. It came up as I was thinking about what to do. I thought it would be fun to do short films about the sexual lives of animals. It’s always been a hobby of mine. I’ve always read a lot about biology, and I’m currently working on my graduate degree in animal behavior at Hunter College. We did three pilot episodes and Sundance liked them. The series ended up having 40 episodes and it turned out to be immensely popular.

When did the idea of a stage show come up?
About a year ago there was a request to transform it into a monologue. I thought, “Oh my God! First they want me to do it in two minutes, now they want and hour and a half!”

What was the writing process like?
I wrote it with a French writer named Jean-Claude Carrière, who is very famous in Europe. He’s a man in his 80s who has worked with, among others, Peter Brook and Luis Bunuel. He’s a very knowledgeable and cultivated and we share a lot of the same interests in zoology and biology. He really liked the short films and he suggested we integrated some of the images.

So the format is different from the film series?
Yes. The length is the most radical change, obviously; the show is about an hour and fifteen minutes. We use different images from the films. If I’m speaking about a toad, for instance, there’ll be an image of me dressed up like a toad in the background. I also do puppetry in the stage show. I have gloves made for that purpose with features drawn onto them and wings attached, depending on the animal. It’s a little bit like show and tell. I like to use simple solutions for the props. It’s like a child’s perspective that way.

You’ve already performed the show in Europe. What was that like?
When I performed the monologue in France they were in the midst of debating whether or not gay people would have the right to adopt. I didn’t write the monologue with this in mind, but I do, at one point in the show, talk about how homosexuality is common among many species of animals. I encountered a lot of strong reactions because of that. Homosexuality has been studied and confirmed in many different species. There’s a book about it that came out a couple of years ago, Biological Exuberance by Bruce Bagemihl. It’s a very well-documented phenomenon. An argument you often hear against homosexuality is that it is against nature, but you can’t really say that anymore. You can be against it personally or politically, but that homosexuality is against nature is simply not true. When you do a monologue you can reflect on issues like that more profoundly.

In the film series you wear elaborate animal costumes. Will you be bringing that to the stage?
I don’t have as many costumes, no. I do change outfits over the course of the show, but that’s a surprise. The costumes we used in the film series were very complicated. I came up with the basic idea for every one of them. It all had to be simple, so I would think of one or two features that would make me recognizable as a certain animal. For instance, with a fly, you either need the characteristic eyes or the wings to convey that idea. I would highlight certain features like that and then take it to the costume designer. We also brought in the artist Andy Byers, who makes amazing paper art, to help with the execution.

How did you pick the animals you work with in Green Porno?
I used a scientific approach. I always want to use different examples so there’s no repetition. If we’re looking at animal mating behavior, for instance, I try to find animals that approach mating in different ways. The technical term is biodiversity. A big part of the selection process also had to do with what would look good on film. I had to take into consideration whether or not I could construct a realistic costume. But generally I tried to be as diverse as possible and use that as a guiding principle.

Do you have a favorite animal from the series?
I don’t have a favorite really. Some worked better than others. I don’t think the first three pilots we did have the confidence that the rest of the episodes do. People don’t notice that, but I do. That’s the good thing about pilots. You see what works and what doesn’t. I really owe a lot of credit to Andy Byers and producer Rick Gilbert for their incredible work on the costumes and the execution.

Which costume was the worst to wear?
The earthworm costume was the worst to wear. I think the costume was about 35 feet long. I didn’t have arms or legs in the costume, so I couldn’t scratch my nose if I had an itch or get a drink of water or anything. It was torturous! If I laid down completely in the costume the camera couldn’t really get a shot of my face, so they had to prop me up in an awkward position. It takes about a whole day to shoot an episode. Holding that position and not being able to use my hands for balance almost drove me crazy. When I see the episode, which I really like, I always shudder. I think at a certain point I almost exploded out of it. I felt like screaming, “I give up! I can’t take this!”

Working on Green Porno, do you feel closer to an understanding of how animals experience the world?
I don’t think so. It’s impossible to understand. It’s a mystery how they perceive the world. My greatest wish would be to be a dog for one day, just to see things from that perspective. Sometimes you feel a great empathy with animals and now with all the research being done on genetics we’ve found out that we share a lot of genes. I do believe that animals have emotions and I think their emotions are similar to ours. But this is not a scientific belief. This is an Isabella-belief.