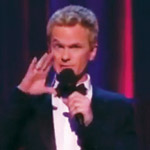 Neil Patrick Harris has now killed it four times as the emcee of the Tony Awards, and with his second turn at the Emmys on September 22, he’s poised to nail it again. We watched hours of clips to distill his mojo to a few key moves. Future Oscar host Ellen DeGeneres: Take note.

Kick it off with a costume change
Perhaps inspired by his current role as president of the Magic Castle, Harris mysteriously manages multiple outfits in the span of one song. Note the presto chango from dapper suit to purple garb to black tie during the 2011 Tonys.

Belt it in the middle
Most hosts start strong, then crash within the hour. Harris defeats halftime slump by singing throughout like it’s a Broadway show. Our favorite: his duet with Hugh Jackman in 2011.

Go improv at the end
The showstopper caps off the night with an impromptu song that highlights the winners and consoles the losers, which he presumably memorizes on the spot. The question this Emmy night: What rhymes with Breaking Bad?

Understated vs. Over-the-Top: The Best and Worst Emmys Fashion