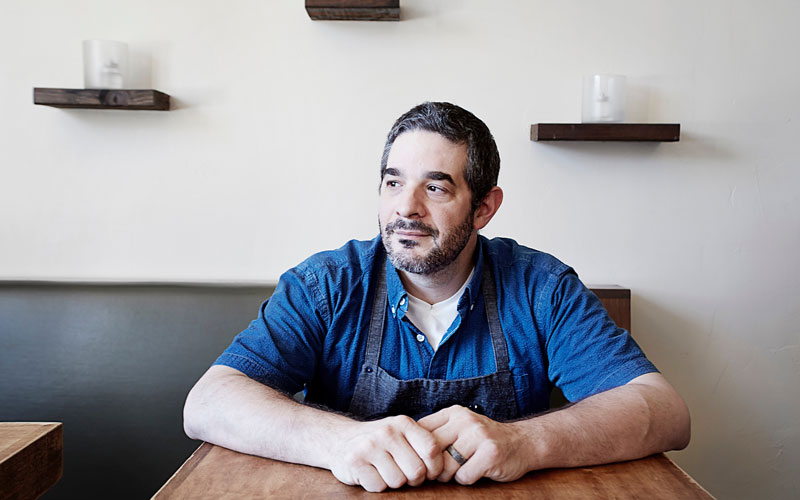 Jeremy Fox’s On Vegetables is a new 300-plus-page book full of the kinds of recipes and insights you want. Like how confit garlic gives depth to cacio e pepe and how to roast porcini caps en papillote. With plant-based cooking at a cultural zenith, it’s compelling to get tips from one of the genre’s most important chefs. So for a food nerd like me, opening pea pods beside him in the quiet of the Rustic Canyon kitchen at noon is a thrill.

The 40-year-old describes himself as “a broth guy”—which you’d probably glean from his directions for a three-day caramelized onion stock. Today I’m watching him make something faster but no less powerful: pea shell stock, which will sparkle around peas with an overlay of crushed white chocolate and macadamia nuts. It’s a tricky dish. Done wrong, he tells me, you give people a reason to say why they’ve never heard of that unlikely combination.

In addition to a trucker cap that says “Ohio Against the World,” the Cleveland-born chef is wearing Birkenstock clogs and a Hedley & Bennett apron. The shelling done, he wraps the pods, mint stems, and one garlic clove in cheesecloth and places the bundle in a pot with water to slowly infuse. While we wait, I ask him about his connection to vegetables. Childhood was tough and included a year living with his grandparents in Philadelphia, where the smell of tomato vines permeated the suburban garden. After finding his way to cooking, he eventually became chef of David Kinch’s Manresa before signing on to open the meatless Napa restaurant Ubuntu.

Fox was never vegetarian. “The last meal I cooked at Manresa,” he says with an impish smile, “was a 14-course pig dinner.” The meat-cooking techniques he applied to produce at Ubuntu gained him national attention. But as he recalls in the book’s introduction, acclaim triggered anxiety that became crippling under the onslaught of meds prescribed to treat it. His 2011 move to L.A. was the start of a recovery that culminated with Zoe Nathan and Josh Loeb offering him the job at the low-key Rustic Canyon in Santa Monica. “For a year I was left alone—no reviews, nothing,” he says. “It was what I needed.”

The peas having been cooked and iced, we turn our attention to double-shucking them. Pressing on their skins makes the insides pop out. To work alongside a chef is to glimpse his or her idiosyncrasies. Fox likes his lemons quartered, with the inner pith cut away. Each station has a setup of clean and used spoons for tasting. I understand attention to detail; still, I wonder aloud whether peeling peas isn’t up there with peeling grapes in fanciness. “All this work is about creating vegetarian luxury,” he says.

After coating the peas lightly in Arbequina olive oil and layering them in an eggshell-colored bowl, Fox painstakingly adds the nuts, chocolate, and freshly picked spearmint leaves. He doesn’t yet add the chilled broth. The flavor isn’t quite what he wants. He doses it with tiny amounts of champagne vinegar four times before pouring one ounce around the vibrant green orbs. Pod and pea rejoined, the vegetables have been distilled to their essence—achingly delicate, more potent than nature—by a master’s hand.