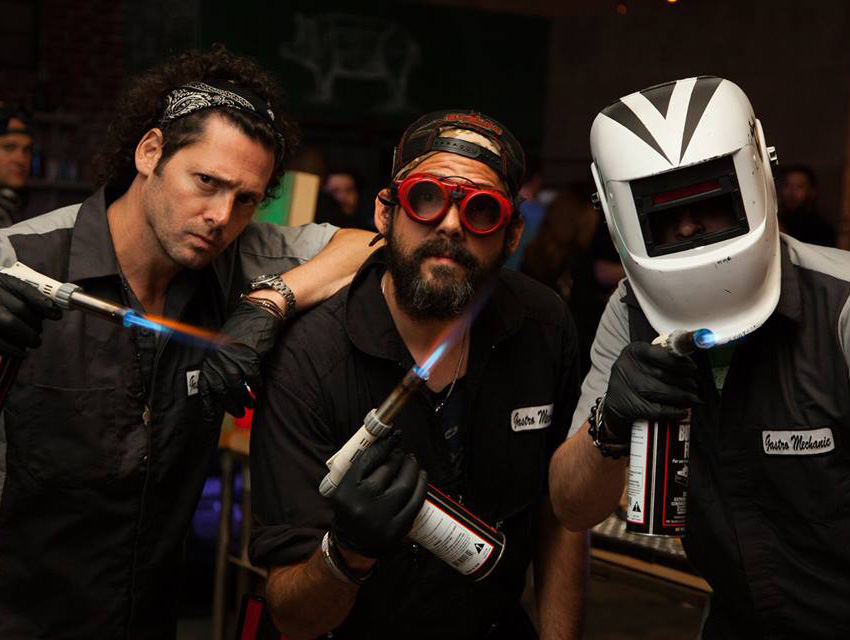 I was a pint or four deep at Inglewood’s Three Weavers Brewing Company when I unwittingly ran into the blowtorch-wielding maniacs behind Fill R Up Gastro Garage, one of the hottest (literally) pop-ups in the city.

Decked out in welding masks, steampunk goggles, and machinist uniforms that double as aprons, the crew of three “gastromechanics”—co-founder and front-of-house restaurant veteran Stewart Levine shies away from the term “chef” because, in his words, “that would be an insult to, you know, real chefs”—were applying a heavy dose of flame to a sheet tray full of marshmallows that were set to go on one of Fill R Up’s signature items: The Campfire Tank.

It’s a savory brioche donut stuffed with aerated double chocolate crème, graham powder, torched marshmallow pillow, and chocolate chunk—and with a pocket full of small bills, I had to get one of those $5 modernist flavor bombs into my mouth as soon as possible. I couldn’t have stopped at one if I tried; with the help of some friends—and a few more beers—I wound up eating my way through Fill R Up’s entire menu.

Every item starts with the same base: A savory brioche donut sourced from a local bakery that, to keep up the gastro-gearhead aesthetic, is dubbed a “tank.” The fillings are where it starts to get crazy.

The Cubano Tank boasts gruyere foam, torched 12-hour slow-roasted pork, applewood-smoked ham, and mustard caviar. For non-meat-eaters, there’s the El Camino Tank, overflowing with jack foam, torched plugra poblano butter, crema, and pomegranate seeds. But Fill R Up’s first ever recipe—the tank that started the revolution back in November 2014—is still one of their most popular. The Filly, a clever riff on the cheese steak, is filled with white cheddar foam, torched New York Strip, onion puree, and truffle salt.

If that last one sounds familiar, you may have seen it before at an unexpected venue: The Bazaar by José Andres. That’s where Levine used to work front-of-house and where the initial inspiration for Fill R Up was sparked (with Andrés’ blessing of course).

Levine said he’d never seen people react stronger to a dish than The Bazaar’s Philly cheesesteak served on air bread with torched wagyu beef and cheddar foam, and emotional response is the basis for his overarching food philosophy.

“It’s not about just putting food in people’s mouths for sustenance and flavor,” he said. “Food has to be more; it has to tell a story; it has to engage people on a deeper level.”

If there’s anything that Fill R Up isn’t lacking, it’s emotional engagement—and people in high places have been taking note. Fill-R-Up is fresh off of catering private events for Ron Howard and Seth McFarlane, providing noshables for the Avengers: Age of Ultron world premiere, and signing with juggernaut talent agency CAA to work on TV development deals.

But, Levine, along with business partner and fellow gastromechanic Adam Manacker, think Fill-R-Up’s future ultimately lies in franchising. They see their small band of misfit food pirates gradually expanding out of L.A., and into cities like Chicago, Miami, New York, and Seattle.

While they’re still hanging around L.A., follow them on Twitter (@FillrUpLA) and check out their website to find out where and when you can get your tank torched.

Everyday Omakase at The Bazaar Now Available to the Masses