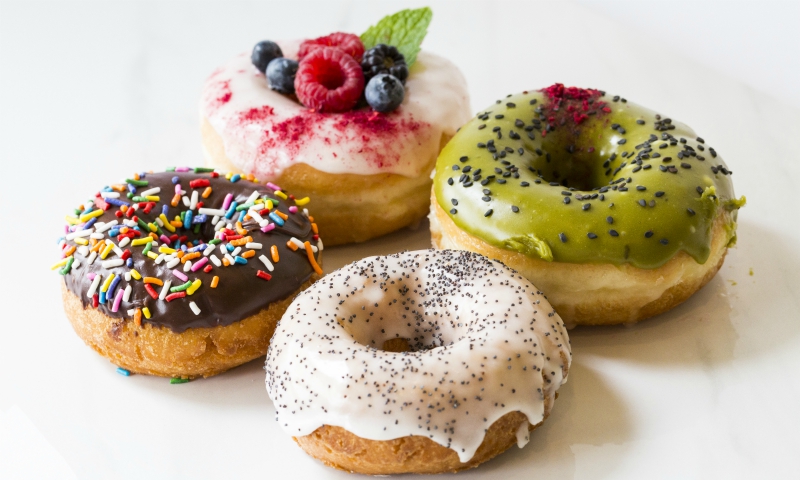 All photos by Steffi Victorioso

The first National Doughnut Day took place back in 1938 as a day to recognize not just the fried rings of dough but also the female Salvation Army volunteers who served doughnuts and other baked goods to U.S. Army soldiers in France during World War I. Since then, our love for doughnuts has turned them from a utilitarian breakfast staple into an obsession. Present day Doughnut Day is observed on the first Friday of June every year, but the doughnut has become so iconic that it’s celebrated pretty much any damn day of the year. Why should we limit ourselves to one day of celebration for something so glorious?

Today we’re celebrating the doughnuts at Donut Friend in Highland Park. Their menu features an extensive variety of designer doughnuts named after bands and musical artists, and all of them are totally vegan. Some of their flavor combinations are a little wild, but many are familiar from the food items from which they were adapted—Girl Scout cookies, beverages, candy bars. We tried every doughnut in the case and there wasn’t one doughnut we didn’t like, but there were a few we loved and a few we positively wanted to smash our faces into. A vanilla cake doughnut with chocolate glaze and nuts. It’s good, but it’s a doughnut so of course it is. This vanilla cake doughnut is topped with white chocolate, macadamia nuts, and Chinese five spice. It smells and tastes of cinnamon with a subtle nuttiness. It’s pleasantly aromatic. If it were a Yankee Candle fragrance, we’d for sure buy it. A vanilla cake doughnut that comes with dark chocolate or vanilla glaze and rainbow sprinkles. It’s pretty much the same as the Dag Nutty except instead of nuts it has sprinkles. And it’s higher on the list because, well, sprinkles! Much like the beloved Girl Scout cookie, this doughnut is rich with chocolate and coconut. So, if you blew through your GS cookie stash, and cookie season isn’t for a while, you can get your Samoa fix with this doughnut. Contrary to its appearance, this doughnut is a fruity one. There’s a sweet passion fruit glaze and it’s topped with cocoa nibs. The glaze has almost a candy-like sweetness to it. But the best thing about this doughnut is that half of its proceeds go to charity! What do you get when you mix apple pie with a doughnut? This. It’s apple pie filling and doughnut dough mashed together and fried. Salted caramel is a popular flavor of pretty much everything these days, and this doughnut is a great example of that. It’s a raised doughnut with a thick caramel glaze topped with sea salt. Prepare yourself for an authoritative caramel sweetness. This one is reminiscent of another Girl Scout cookie. It’s made with a chocolate cake doughnut topped with a chocolate glaze and filled with mint cream. The flavor is incredibly fresh and kind of makes you feel like your in one of those York Peppermint Patty commercials. Chick-O-Stick is the candy at 7-Eleven that’s collecting dust because no one’s gone near it in years. It’s a shame though because as we discovered while eating this doughnut that these things are tasty as hell. They’re crumbled on top of a chocolate glaze, and the raised doughnut is filled with peanut butter and Just Like Honey (a vegan honey-flavored syrup). This one features a matcha green tea glaze sprinkled with black sesame seeds and a light dusting of freeze dried raspberry. The matcha flavor is subtly sweet and not overpowering like some matcha-flavored desserts tend to be. Besides tasting yummy, this doughnut is so damn colorful and good looking, you might as well just get one for the ‘gram. The classic children’s snack makes for a delicious doughnut flavor combination. The only thing this needs is some salty, crunchy potato chips stuffed inside. This raised doughnut is filled with a chocolate hazelnut spread and a bit of olive oil and topped with vanilla glaze with a sprinkling of sea salt. The sea salt heightens the already rich hazelnut flavor, which comes at you like a jar of Nutella to the face. It’s impossible to say no to a classic jelly- or cream-filled donut. This airy and light bismarck donut is filled with either raspberry jam, blueberry jam, or chocolate cream. The raspberry filling is the most popular out of the three, but we loved the chocolate-cream-filled one. This coffee-infused cake donut is topped with an espresso glaze. Order this with an Americano and have a dunk fest. This raised donut is topped with chocolate glaze and sea salt with a speculoos cookie butter filling. The speculoos flavor is intense, like a freshly baked cookie inside a doughnut. Make sure to have some milk (or soy milk) with this one. Cracking the top of the bruleed sugar on this doughnut is half the fun. It’s filled with a luscious Bavarian cream, and right when you think it’s gonna be too sweet, the orange zest hits you with a light citrus flavor. This raised doughnut is topped with a bright lemon glaze, real berries, and fresh mint. The tangy, sweet flavors are as vibrant as the colors. Make sure to get your phone out before it gets devoured because this is another ‘gramworthy specimen.

5. Chocolate From the Crypt If you like Mexican chocolate, you have to try this one. A chocolate cake doughnut is topped with chocolate glaze and spiced with cayenne and cinnamon. The spices keep the sweetness at bay, and they produce a nice, gentle warmth in the back of your throat, like taking a big swig of Mexican hot chocolate. This doughnut is unlike any donut you will ever have. It’s topped with sweet vanilla glaze and a tart balsamic reduction, and it’s filled with a slightly salty-and-sour vegan cream cheese, strawberry jam, and fresh, peppery basil. All the flavors complement each other so well. It’s one of the more adventurous doughnuts, as well as one of the messiest. Grab some extra napkins. We never met a strawberry shortcake we didn’t like. This raised doughnut is filled with whipped cream and fresh strawberries. It’s by far the most popular offering on the menu. The flavors are uncomplicated, straightforward, and a guaranteed hit even with those picky-eater kiddos. The lemon glaze on this vanilla cake doughnut is super zingy. This is as refreshing as baked goods get. It’s the ultimate palate cleansing doughnut, and it might be the only one that’ll keep your tastebuds totally perky from the first bite to the very last. RELATED: 3 New L.A. Restaurants You Have to Try This June