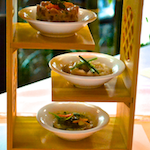 The genesis of a popular dish is normally a tough thing to precisely pin down. Unless you’re talking about that daft donut, the Cronut, you’d be hard-pressed to triangulate the ground zero of any dish so ubiquitous that it’s taken for granted on many menus.

Back in 1984, when chef Shigefumi Tachibe of Chaya Brasserie improvised a non-beef substitution for steak tartare, he had no inkling that he’d be considered the father of tuna tartare. He just wanted to quickly whip up something for customers who sneered at steak tartare and sought a lighter, healthier alternative.

Although there are disputes on who actually created tuna tartare and when it was conceived (some believe the raw tuna delicacy was around as early as the 1970’s), there is no doubt about whose version swept the nation and the world. In fact, Tachibe’s blade is on permanent display at the Smithsonian Museum because of this food feat.

To honor Tachibe’s culinary achievement as well as to fete Chaya’s 30 years in Los Angeles, an anniversary dinner menu was created showcasing some of the chef’s finest creations — obviously, his famous tuna tartare was one of them.

One of the dishes on the anniversary menu is a tartare bonsai box. It’s a tower of tartare. Three levels include: halibut tartare with fresh black truffle, hamachi tartare and wasabi dashi, and the classic tuna tartare.

Each tartare has its own unique consistency and character. The halibut tartare is prepared from live halibut and enlivened with earthy and sweetly fragrant truffle. Although made with pickled wasabi, the hamachi tartare is understated and gentle in texture and taste, with whispers of spicy wasabi and savory dashi.

Tachibe’s tuna tartare steals the tri-level show with its bold personality. The fresh tuna’s slickness is sensualized by creamy avocado. Further enhancing the tuna chunks is the tartar sauce made up of green peppercorn, onion, Dijon mustard, capers, tarragon, and mayonnaise. Sweet potato crisps crown the display and act  as a palate cleanser.

After 30 years, the tuna tartare at Chaya is still going strong and is just as popular as ever. Wonder if that will hold true for the Cronut. Only time and our tastebuds will tell.