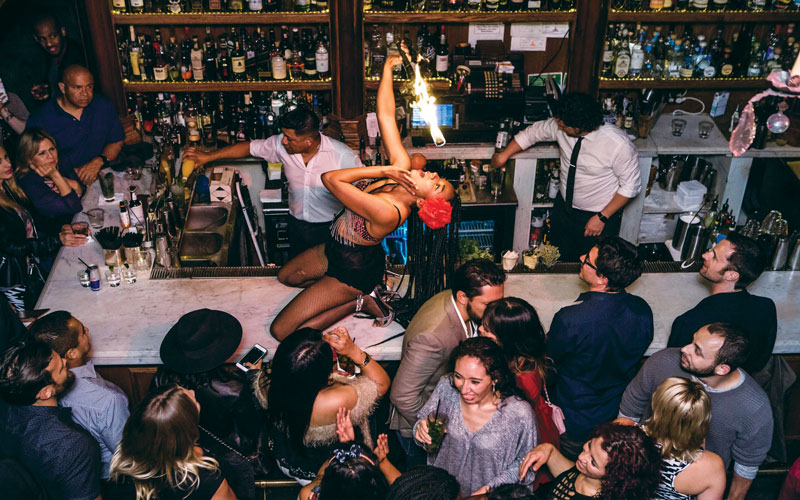 The scene outside East Hollywood’s La Descarga looks a lot like the clubs I avoid—velvet rope, hulking bouncer, scrum of people—which might be why, despite the fact that the joint celebrates its seventh anniversary this month, it’s taken me as many years to pay a visit. But I get in line and wait it out, eager to learn whatever the club’s longtime devotees already know. The doorman guides me inside, and I follow a few others up a candlelit stairwell into a sparsely decorated apartment. A woman greets us and opens an armoire, revealing a small door. “Go on,” she smiles, and I feel like I’m heading to Narnia. The door leads to a narrow balcony, where a wrought-iron spiral staircase descends into a packed and dazzling bar. On another balcony a four-piece band plays Cuban-inflected jazz and rumba. It’s as though I’ve been transported to a speakeasy in 1940s Havana—which is the idea. “Not everyone can get to Cuba,” says general manager Andrés Langhans. “So we wanted to bring a taste of Cuba to Los Angeles.”

Ever since the election, I’ve been struggling. A buddy of mine told me that La Descarga could be the unorthodox antidote to my dampened spirits, not because he thought a night out would help me forget the troubles of the world but because the club is a microcosm of Los Angeles—cultured, accepting, encouraging. Almost immediately I can see what he means: The atmosphere exudes what feels like an impenetrable joy, regardless of the overwhelming sorrow gripping much of the country. I wander through the interconnected rooms. In one by an alley, men puff on Cuban cigars, while an intergenerational sea of people dances in another. Back in the main room the band is taking us all to church; the saxophonist bleats out the notes to the Beatles’ “Come Together,” and the melting pot of a congregation—white and Latino and Armenian and Asian and African American—sings along. Here is proof: Even in what some are calling a “divided America,” L.A.’s unique multicultural frenzy can thrive.