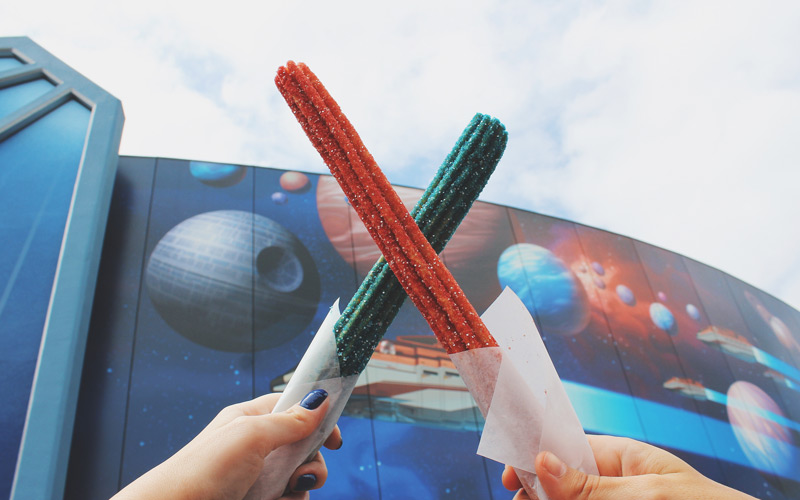 When we heard about new lightsaber churros being available at Disneyland during the month of May, we reached out to Disney’s press department about getting some photos. After several calls and emails, we received an unexpected reply: Disneyland does not sell “lightsaber churros.”

Special red and blue churros ARE available in the Tomorrowland section of the park, but they are not “lightsaber churros.” They are officially known as “red churros” and “blue churros,” and unlike some of the photos floating around online, they do not come with a lightsaber handle. (Eater LA says those handles were only available during a special event at Disney’s Hollywood Studios.)

The red and blue churros may resemble lightsabers, but according to Disney PR, “They are ‘packaged’ like regular churros:  no handle, paper around one end for the guest to hold onto. They are different from regular churros in that they are red or blue and are sprinkled with sugar, but no cinnamon.” No cinnamon, and no kyber crystals, either?

Since these are DEFINITELY NOT lightsabers (COUGH) that appeared the same month as May the Fourth, it would be completely misguided to buy a blue churro for yourself and a red churro for a pal and have an epic battle between good and evil right there in front of the Star Tours attraction. If you insist on challenging someone to a churro duel while quoting lines from the Star Wars movies, please be aware that it’s likely to have a tragic ending, with somebody’s churro ending up on the ground. May you both be hungry enough to call a truce and eat your weapons.

RELATED: How Star Wars Land Will Give Tomorrowland a Chance to Return to Its Roots