Home Uncategorized How To Do…Universal Studios 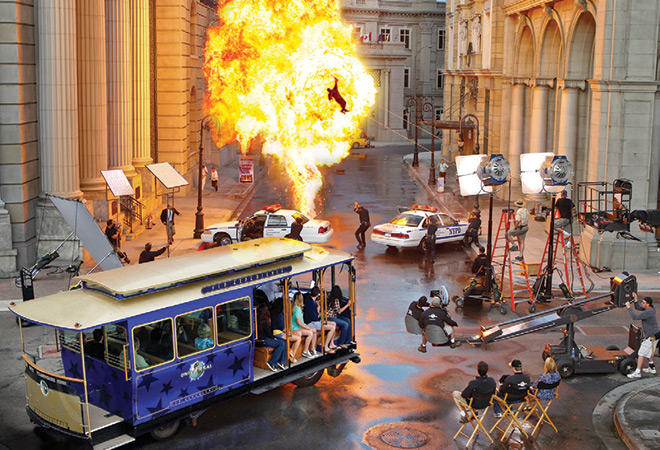 Getting There
If you take Metro, there’s a shuttle from the Universal City station to the park. Buy your Universal Studios ticket—it’s $84 and good for a year—or a VIP pass ($349) that includes a private trolley tour and a catered lunch. The Rides
To avoid the crowds, go against the grain and head directly to the lower lot. You can get a jolt of adrenaline on rides inspired by Jurassic Park, Revenge of the Mummy, and Transformers. Hate waiting? A front-of-the-line pass might be worth the additional $85. Midday Meal
International Cafe on Rue de Rivoli is a welcoming refuge, with long communal tables where you can enjoy jambon baguettes and house-made pickles or share a platter of brie and grapes. Famous Faces
While you’ll spot an occasional A-lister on the back lot, the only way to guarantee a celeb sighting is to attend a taping of the entertainment news show Extra. On weekday afternoons look for hosts Maria Menounos and Mario Lopez by the steel globe at the entrance, no ticket required. Animal Actors Show
Guinea pigs, ducks, cats, and dogs—all of them rescues—are the stars, with the performers often sticking around for meet-and-greets after their bits. The 20-minute sets occur five to eight times a day. Despicable Me: Minion Mayhem
Featuring seat-shaking special effects and those adorable Twinkie-shaped creatures known as minions, the park’s newest ride unfolds in its own neighborhood, complete with a water park, carnival, and theme restaurant. The Studio Tour
The original crowd-pleaser is still a huge draw. The 45-minute tram ride (we recommend the driver’s side of car number 3) takes you past sets that were built in the silent-film era and are still in use today. Look for cinema’s most famous house: Every tour cruises past the crumbling mansion from Alfred Hitchcock’s Psycho.