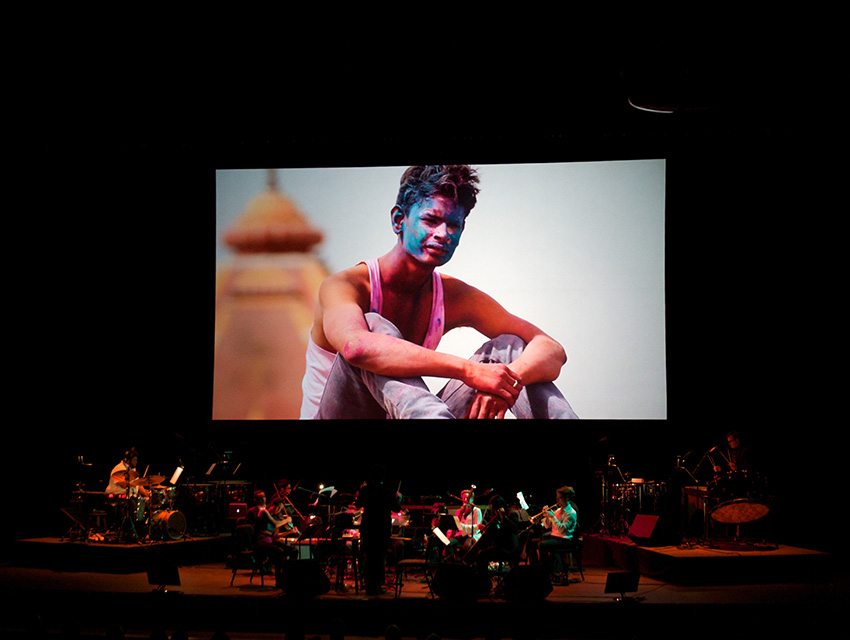 Composer Igor Stravinsky’s landmark work The Rite of Spring, though commonly performed in concert halls, was written as a ballet. Last year this composition, considered one of the most groundbreaking works of the 20th century, celebrated its hundredth anniversary. To honor the centennial Carolina Performing Arts at the University of North Carolina at Chapel Hill commissioned multiple works by various composers. Among those works is Radhe Radhe: Rites of Holi a 35-minute film from director Prashant Bhargava. The task of writing music was left to award-winning musician and composer Vijay Iyer. The film will be shown at UCLA’s Royce Hall on Friday with Iyer and the International Contemporary Ensemble performing the score. They will also perform Iyer’s Mutations I – X.

“The Rite of Spring is a piece I’ve studied,” Iyer says. “I wouldn’t say that he [Stravinsky] himself is a huge direct influence on me, but there is a sense of juxtaposition that you get in his music. There’s a logic if you look at the word juxtapose and compose. They basically mean the same thing. Juxtapose is about putting things against each other; compose is putting them together. He did both. As an improviser you want to be able to improvise with fundamentals with and against each other.”

Radhe Radhe combines footage of the Holi Festival, a celebration of spring during which participants throw colored powder and water in the air. Iyer explains them both. “What this whole holiday is about is this encounter with humanity and these higher powers. Radha and Krishna: She was a person and he was a God. She was older and she was this sentimental education. On the other hand he had these mystical powers so her experience of love became the embodiment of that relationship to mystical power. This is a springtime holiday when the earth changes and so much around you is new and beyond your control. Part of it is a ritual transformation where you are forced to understand your relationship to more than the immediate. It is about this encounter of the earthly and the celestial force.”

Though Bhargava was editing the film to Stravinsky’s composition, Iyer couldn’t think about that. “It was important for me not to listen to it at some point. He gave me access to some of the raw audio they pulled in. I worked with some of the rhythms I was hearing and melodies I was hearing in the actual audio. It wasn’t about completely representing or mastering those rhythms, but really trying to zero in on the dance impulse that you see. What’s making these people move? That’s what I wanted to get at.”

If you look at the wide breadth of Iyer’s work, which includes such albums as Accelerando, Holding It Down: The Veterans’ Dreams Project, and Historicity, you understand why he bristles at being pigeonholed as a jazz musician. “I honestly think that that word has been limiting for a lot of people. When I look at Duke Ellington or Miles Davis or John Coltrane or Herbie Hancock, I see people who refuted that label. They had no use for it. That’s a tradition that inspired me, pushing back against that kind of commodifying tendency.”

In February, ECM will release Iyer’s trio album. “Some people might see it as a return to form; he got this other stuff out of his system,” he says. “It’s all actually quite fragile and vulnerable. It’s not like making hit records. This is on the edge of what people will accept or tolerate. But if you can reach an audience, we can all get somewhere together that none of us predicted through this work.”

There’s an Ornate Hindu Temple in This Far-Flung Suburb