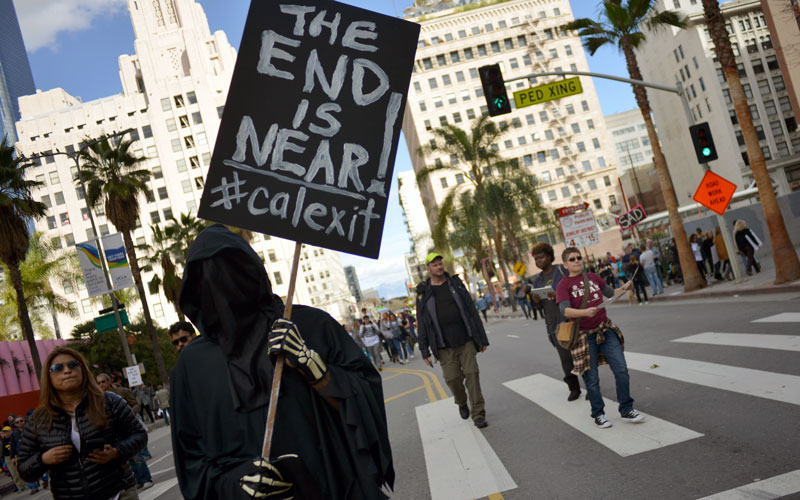 Following the inauguration of literal Bond villain Donald Trump, Californians have taken the first steps toward secession. The California Secretary of State just gave the Yes California Independence movement the green light to start gathering signatures to put #Calexit on the ballot in November 2018, LA Weekly reports. A substantial 585,407 signatures are needed, and the organizers of the movement have until July 25 to get them.

If the measure does end up on the ballot and is approved, it would repeal the provision in the state constitution saying we must be part of the United States and would allow for a vote on actual secession at a later date. After that, Calexit would require an amendment to the U.S. Constitution—a looong shot, but not impossible. Will it ever happen? If this were 2015 (pre-Brexit, pre-Trump) the obvious answer would be no. But now, who’s to say?

On the other hand, #CalExit doesn’t sound so bad anymore…

Imagine it. A promised land of delectable sunshine, surfing, free college, no border wall, flourishing communities of refugees and immigrants, people ironically and nonironically saying “hella” all mingling together without judgment, increasingly intersectional Star Wars movies, a marijuana farm in every backyard, SJW snowflakes brought on as advisors to all major corporations, statues of Kamala Harris—our new queen—in every public square, a ban on guns (and knives and particularly aggressive-looking ladles), mandatory pussyhats, In-N-Out vouchers for all. Oh man, the potential.

If you’re down to channel the reckless populism that seems to be the spirit of the age, or want take your California pride to the next level, or just feel the need to stage the ultimate rebellion against Trump, you can sign the petition here.

Thomas Harlander is a staff writer at Los Angeles magazine. You can follow him on Twitter and Instagram. He recently wrote: There’s a Trump Tax Returns March Happening in April, and It’s Going to Be Huge