Home Food 8 Ways to Immerse Yourself in Chinese Culture in the San Gabriel... 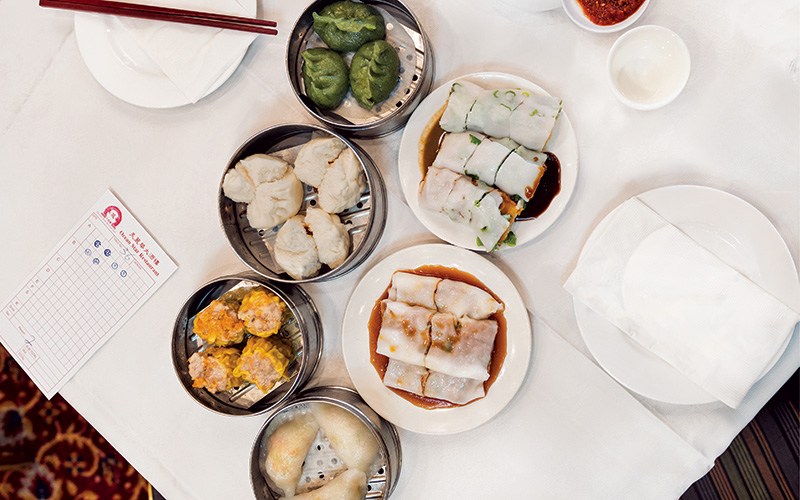 Dine L.A. director Stacey Sun knows a thing or two about good food in Los Angeles (obviously).  Here is her guide to your next foray into the county’s thriving Chinese neighborhoods.

“From 5 a.m. to 7 a.m., it’s $20 admission—that’s the key time to go. I’m a junkie for midcentury items—everyone wants to find that Eames chair at the best price, right? You need your fanny pack, your roller cart, and a Camel-Bak. That’s how you do it.” » 1001 Rose Bowl Dr., Pasadena

“It’s my favorite dim sum spot in L.A. right now. They make pan-fried sheng jian bao that is crispy on the bottom and juicy on the inside. They also do this purple bao filled with bright yellow custard, which feels very Lakers.” » 855 Baldwin Ave., Arcadia

Chinese Garden at the Huntington

“It’s a no-brainer. Growing up, we took the Huntington for granted because it’s in our backyard, but as adults, we’re so lucky to have a place like the Chinese garden. It’s a nod to how the area’s population has shifted in the past 15 years.” » 1151 Oxford Rd., San Marino

“The Langham relaunched its spa program, which is based on traditional Chinese massage techniques. It’s very Eastern focused—they’re all about helping you stay balanced.” » 1401 S. Oak Knoll Ave., Pasadena

“I’m always hungry after a massage. I grew up going to Kee Wah Bakery; they’re known for their bo lo bao, or pineapple buns, which are a very Hong Kong thing. There are no pineapples in them, but there is a yellow crumbly sugar crust on top that is scored in a way that mimics a pineapple.” » Various Locations

“It’s a Buddhist temple, but they’re open to the public because they have a vegetarian buffet that’s only $8 a person. You can get some culture in by visiting the temple and then having a vegetarian meal. You can also get married there for free—my friend did it years ago.” » 3456 Glenmark Dr, Hacienda Heights

“Their beef roll is phenomenal. Think of it as a burrito but with a roti-style dough that’s layered with beef brisket, cilantro, green onions, and hoisin sauce. It’s the best thing. My parents told me about it—they’re my guides to the SGV.” » Various Locations

“I see it as an Asian food incubator. There are so many creative vendors there. One makes curry rice, and it’s formed into the shape of a bear head and then plunked into a bowl of curry. It’s so Asian, it’s so cute, and it’s probably one of the most Instagrammed items to come out of the summer market.” » Four weekends a year at Santa Anita Park