Home Film Scene It Before: The Thriller House 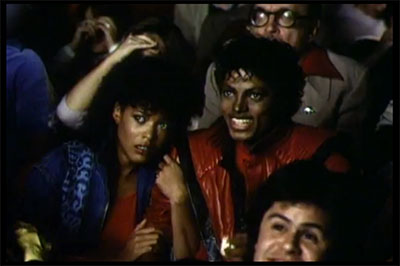 Halloween is almost upon us, and most Angelenos likely have their holiday plans in full effect. For those who have yet to cement their trick-or-treating itinerary, I have a tip for you: The 1300 block of Carroll Avenue in Angelino Heights is not only one of the most popular candy-grabbing venues in all of SoCal, it also happens to be the site of a rather famous spooky filming locale.

Dotted with gorgeous Queen Anne and Eastlake-style structures, most of them dating back to the 1800s, the street is nothing short of idyllic. Thanks to that ancient architecture, though, the area also gives off the air of being haunted.

Carroll Ave. homeowners seem to embrace that notion. I have visited the neighborhood many times, almost always during the month of October, and the Halloween decorations gracing the majority of the residences look like something from a movie set. A friendly homeowner once informed me that come All Hallows’ Eve, lines of trick-or-treaters run twenty deep in front of each property all night long. In the middle of the block, at 1345 Carroll, is the Sanders House, a 3,532-square-foot manor that was featured in Michael Jackson’s Thriller. The stately property, which has been undergoing renovations for years and always seems to be in a half-dilapidated state, was built in 1887 for a local warehouse operator named Michael Sanders.

The dwelling has long been a darling of the screen. It was featured in the Season 4 episode of Charmed titled “Size Matters” and in 1989’s Teen Witch. In Thriller, it is where Ola Ray runs while trying to escape a gaggle of dancing zombies.

To say that I am a fan of Thriller would be a gross understatement. My parents recorded Making Michael Jackson’s Thriller (on VHS!) when it first aired on television in 1983 and I proceeded to watch it religiously, to the point that the first few minutes of the tape eventually wore out. While the VHS may not have held up through the years, my obsession with Thriller never waned. Twenty-seven years after its release, I enlisted some of my friends to participate in a surprise performance of the Zombie Dance at my wedding. It wound up being incredibly difficult to learn, though (the dance consists of over two full minutes of intense choreography with virtually no repetition.) So we settled for performing the Jackson 5 medley instead, which proved much easier to master and was quite a hit with our guests.

Thriller, which is recognized by the Library of Congress as “the most famous music video of all time,” was shot over four days’ time in Los Angeles in October 1983. The Palace theatre in downtown Los Angeles is where MJ comforts a frightened Ola (it is rumored that only the exterior of the theatre appears in the video and that the interiors were shot at the Rialto Theatre in South Pasadena). The Zombie dance was filmed at 3701 E. Union Pacific Ave. in Boyle Heights, and Griffith Park is where the 1950s werewolf movie scenes were lensed. The cemetery scene and interior haunted house sequences were both shot inside of a soundstage at Raleigh Studios in Hollywood.

If you do make it out to Carroll Ave. to get your candy on tomorrow evening, be sure to keep in mind Vincent Price’s gravel-voiced advice: “No mere mortal can resist the evil of the thriller.”