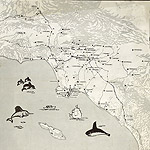 To balance out Columbus Day, we are choosing a map that shows the people who discovered Los Angeles thousands of years before Europeans sailed the Pacific or hiked along the San Gabriels. The original Angelenos were the Tongva tribe (“People of the Earth”). Here they are identified as the Gabrielino Indians due to their proximity to the San Gabriel Mission.

When Spanish Colonial Governor Gaspar Portola took his land expedition through Southern California in 1769—scouting Mission sites with Friars Junipero Serra and Juan Crespi—somewhere between 5,000 to 10,000 peace-loving Tongva tribe members were situated around the L.A. basin. While it is impossible to determine the exact location of the villages at that time, this approximation shows where these Native-Americans might have lived. Historian and cartographer Allen G. Welts estimated the various positions using archaeological and historical information on the tribe. The Tongva were a Shoshonean speaking, hunter-gatherer society that co-existed well with other local tribes such as the Luiseno and Chumash, but with the advent of European settlers, their storyline melts into the that of many other tribes.

After Portola’s expedition, Governor Felipe DeNeve tried to negotiate with the Tongva before the establishment of the San Gabriel Mission by attempting to Christianize them, using converts in the Mission system for labor. Abuse ensued, and when the Missions were secularized in the 1830s, many of the tribe were dispossessed or swindled out of the land they had been promised. Not long after California achieved statehood, the Tongva were promised 8 ½ million acres, but that treaty was never ratified. Overall, the treatment of Native Americans here was every bit as shameful as the terrible stories from the rest of the country. The proud Tongva were almost wiped out as a flood of foreigners commandeered the territory where they had hunted deer and antelope for hundreds of years. At present, only 1,700 of the original tribe remain living.

The center of the Tongva settlement was called Yangna, very near where the original pueblo was founded and where the old and sacred sycamore tree “El Aliso” became the gathering place for tribal decisions on all manner of issues. In a portent of things to come, Yangna was sold to a pioneer in 1831, and the sacred tree was cut down for firewood in 1891. This map is covered with familiar places now known by other names: Maungna is around Los Feliz, Hahamongna is JPL, Sonangna is downtown L.A., Otsungna is Alhambra, Sibangna is the San Gabriel Mission, Houtngna is El Monte, Toibingna is Pomona, Tuhungna is Tujunga and Chokishngna is Bell Gardens. Some of the old Tongva names have survived, though, and exist on today’s maps as Pacoima, Tujunga, Topanga, Azusa, Cahuenga and even Rancho Cucamonga.

Above: The Gabrielino Indians at the Time of the Portola Expedition, Copyright 1962 Southwest Museum, Cartographer Allen W. Welts