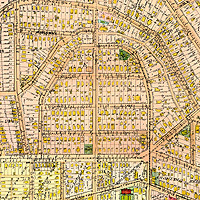 While there is some argument (we’re looking at you, Boyle and Lincoln Heights) over which was the first suburb of Los Angeles, there is no doubt that Angelino Heights or Angeleno Heights, with examples of more architectural styles than any place in the city, is a living piece of L.A. history.

Still sitting 512 feet above old downtown, the area was seen as Los Angeles-transcendent when William W. Stilson and Everett E. Hall set about subdividing the choice tract they had purchased from Prudent Beaudry on the western edge of a booming 1880’s Los Angeles. The idea was to create an upper-crust neighborhood where the elite might live above the hoi polloi while spending huge sums (think $7,000) to build dream homes in this picturesque setting.

Lots sold for around $500 and at first sold quickly. The horse-drawn Temple Street Cable Railway, which ran from Main Street in downtown out to the new development, was the crucial connection to the center of commerce just a mile and a half away. A faltering economy and bank failures took the legs out from under Stilson’s plans but not before he was able to complete 51 elegant Queen Anne and Eastlake Victorian homes.

By 1888 construction completely stopped: development sputtered to a halt along with the trolleys, which offered unpredictable service due to mechanical difficulties brought on by unpaved roads leading up to the hill. Stilson died that very year, but his widow Mary continued the struggle, eventually passing the torch to their son Fielding who revived the dream with less lofty goals.

The reinvented Angeleno Heights of Fielding Stilson featured Craftsman, California Bungalow, Mission Revival and even Streamline Moderne homes built on the outer circle of Kensington road that—while not as grand as the Victorian mansions of his father’s day—were beautiful in their own style. In 1902 the Temple Street streetcars were electrified, and by 1909 (when the young Stilson re-launched the dream development), there were five trolley lines serving Angeleno Heights. By the late teens many silent screen stars chose to build their homes in the area, including Mary Pickford and Gloria Swanson.

Between 1888 and the rebirth of Angelino Heights in 1909 development expanded, but other high-end neighborhoods became more prominent. In ensuing years, the once-exclusive streets were filled in with high-density housing for the constantly expanding city. The 1970s saw revival movement, and restoration of the fine old homes started taking place. In August of 1983, Angelino Heights became the first ever Historic Preservation Overlay Zone. Carroll Street, at the center of this map, is listed in the National Register of Historic Places and homes like Heim, Haskins, Innes, Libby, Phillips, Scheerer and the Sessions house are magnificent examples of Victorian architecture.

When this map was published in 1921, the area was a mix of fading splendor and practical but wonderfully designed architecture. The beauty of the Baist Real Estate atlases is that they show the size of the homes dotting the old streets and the little carriage houses marked with an X at the backs of many lots. The bungalows once built for downtown office workers now run about $800,000 on the real estate market.