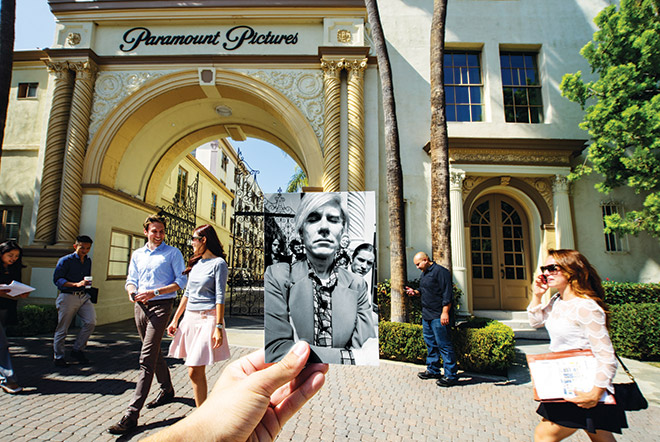 Columbia Pictures had flown Andy Warhol and his “superstars” into L.A. in 1969 to hear the pop artist’s pitch for a film. While in town Warhol, who was genuinely enamored of Hollywood’s plasticity, wanted to re-create the Sunset Boulevard scene in which Norma Desmond passes through Paramount Studios’ iconic Bronson Gate. When security turned him away, his idea, like Desmond’s career, fizzled. Instead Michael Salisbury, on assignment for the Los Angeles Times to trail Warhol, shot the group outside the entrance (inset). “It was wild,” recalls Salisbury of Warhol’s visit. “They tried to sell a dirty movie featuring a rock star.” He suspects that Warhol envisioned Mick Jagger in that role. Columbia declined, citing “moral reasons.”