Home Politics Prince of the City 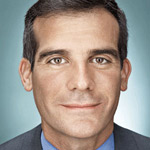 Eric Garcetti has the sort of résumé that other politicians pine for. He’s an Ivy Leaguer (Columbia), a Rhodes scholar, and a Navy Reserve officer. When he first entered politics, he already had some name recognition (his father, Gil, served two terms as L.A. County’s district attorney). He won a seat on the city council at age 31, and by 34 he was council president. Now, at 41, Garcetti wants to make the leap to the mayor’s office. Though the campaign isn’t in full swing yet, Garcetti clearly is. When he’s not bouncing between meetings at City Hall, it seems as if he’s either attending a ribbon cutting or walking the streets of his council district, the 13th, which stretches from Hollywood to Echo Park and north to Atwater Village. Last year, after a decade of living in Echo Park, Garcetti moved with his community activist wife, Amy Wakeland, to Silver Lake. And while he’s known for being polished, he’s also known for being an all-around nice guy—perhaps too nice to run a tough mayoral campaign, let alone to make unpopular decisions as mayor. We caught up with him at Taix restaurant in Echo Park, where, between bites of a salami sandwich, he greeted a stream of well-wishers and acquaintances.

Hollywood has seen lots of new development in the past decade. But the revitalization has also priced out many longtime residents. Did you see that coming ?
It’s the most famous neighborhood we have in L.A., and for 30 years it was always just about to come back, always on the brink. And it did. Of course, everyone wants the good things that come with gentrification. They want lower crime, and they deserve it. People should have a park, a good school. But it also should come with a conscience. If you look at the incomes, Hollywood is still extremely working class. It also has 25,000 fewer residents. You can’t plan where people move. I have the densest-populated district in the city, so I would say it’s right-sizing. People are rational creatures. They are going to move where they can buy a better home for the same amount of money. When I’d go door to door ten years ago, a home would open up and you’d think only one family could have lived there, and there would be three. That wasn’t good for them or for anyone. But we have tried to preserve the single-family neighborhoods—the low-density neighborhoods—to bring back what’s beautiful.

Did the experience of watching your father run for office three times here shape you at all?
A lot of people thought I grew up in a political family, but he ran for district attorney the year I graduated from college. I grew up anonymously; no one knew the name Garcetti. On the one hand, when I decided to run, my father said, “What, didn’t you learn anything from me?” But he also said that you better know who you are going in because it will be who you are going out.

You grew up in Encino. What’s different about L.A. today?
The Los Angeles I grew up in was this place that felt completely anonymous and completely familiar. It was a place where you felt safe, you knew the community, and you could flip on the TV and see The Brady Bunch. And so “everywhere America” was, at least for me, the San Fernando Valley. My parents would say, “See you by sunset,” and I would go off to Little League or wherever. Police officers would wave to us. My family and I had a community garden plot along the 101 freeway. And we’d pull carrots from the ground while meeting our neighbors.

Certainly plenty of people in Los Angeles back then didn’t feel all that safe. Did you have a sense of the larger city?
My great-grandparents and grandparents grew up in Boyle Heights. My Jewish side came there fleeing the Russo-Japanese war, the Mexican side fleeing the Mexican Revolution. My Mexican grandfather never finished junior high school. He fought in World War II and then raised my dad and his sister with my grandmother in South L.A. So absolutely I knew that, saw that. I’d spend every weekend with them. In the ’70s, it was a much safer city, though, even in the tougher areas.

What’s the accomplishment you’re most proud of from the six years you have served as city council president?
Probably the most important thing is the role I’ve played during this budget crisis—a half-billion dollars in pension reform [over three years] and keeping the city from going into bankruptcy. I personally led those negotiations. I didn’t bury my head in the sand, which is what some people did, just wanting to add a zero and say “This budget is balanced.” But I also didn’t say the city employee unions are our enemies. These are people who are providing amazing, critical services to us. We downsized the number of city employees by 4,900. We’ve raised the amount city workers pay into their pensions from 6 percent to 11 percent of their salary. There is no other big city in America that has done that. We’re paying out of pocket for health care for the first time.

Though the budget is technically balanced, a chunk of the balancing act relies on some quick fixes, like furlough days in the city attorney’s office. L.A. is still facing a huge fiscal crunch. In his last budget the mayor proposed cutting about 200 more jobs, but the council postponed any firings until January. Isn’t that kicking the can down the road?
When you look at the money that the layoffs would have saved, it was paltry. Morale is about as important a driver as you have for productivity. And the impact of starting by saying we’re going to have 200 layoffs in a staff of 36,000 is one of the most destructive things you could do.

A hallmark of your style is that you seem to get along with everyone. You’re on good terms with unions. You draw on your Mexican background, your Jewish background. Is there anyone who doesn’t like you?
I can give you some names. I’m not in this office to be liked—I’m in this office to get things done. But I do think that you get more done if you’re good at relationships. You have to realize that on any decision where someone might need their ego addressed, someone else might just need to be invited to the party. In a political structure as complicated as Los Angeles’s, a leader has to be able to navigate all that. You have to be comfortable crossing borders, and that’s who I am.

That’s great when running for office. But the next mayor is going to have to make some unpopular decisions. Have you ever done something really unpopular?
When we created Meadow Park in Silver Lake, the loudest people were the opponents. The easiest thing to do politically would have been to just not create the park. I’ve had that experience with all 25 park projects I’ve done. The political playbook of L.A. is, Keep your head down and don’t do anything new.

I’m sure there were some teed-off local residents. But being for a public park is a little like being for puppy dogs and sunny days. Is there anything that you’ve done that was really unpopular?
Well, I try not to do things that are totally unpopular. I try to build consensus. But going to public employee unions and telling them “You’ve got to give something back” was immensely unpopular. I’ll never apologize to anyone for having balanced the city’s budget. When I got here, it was immensely unpopular to do anything in Hollywood that involved a liquor license. And who could blame them? They had prostitutes and drug dealers down the streets. But Hollywood was dying, and if a restaurant is responsibly run, if it serves a glass of wine, it’s not a bad thing. We had to overcome 20, 30 years of unpopularity of saying yes to anything. CicLAvia was immensely unpopular at first, too. Can you imagine telling people you’re going to close the street in front of their house? But there were folks like me who went door to door and said, “Hey, let’s try it. If it stinks, you’ve got my word we won’t do it again.” And now CicLAvia is part of the L.A. that’s being reborn.

OK, but like a park, it’s difficult to think of CicLAvia as being truly controversial.
But it was. There is nothing more unpopular than messing with someone’s street. You can say that it’s puppy dogs, but it’s not out there. It’s warfare. We’ve got big problems to solve. I’m running for mayor not because I want the title but because I want to do the work. I’m a committed, passionate Angeleno who believes in the potential of the city and doesn’t see it fulfilling that potential.

So where is L.A. falling short?
We’re not positioning ourselves for the jobs of tomorrow. The most important thing that we can do as a city is not to complain about the jobs that have left us; it’s to create the jobs of the future—in technology, entertainment, health care, hospitality, and trade. In all these areas the city has elements that other cities would die to have. We need to do better marketing what this city is. That’s perhaps the most important thing we can do. We don’t have a chief technology officer for the City of L.A. If an enterprise this big has no tech strategy, that’s a problem.

How would you rate the current mayor?
I think he’s finishing strong. It takes time to figure this place out. I don’t care if you were the speaker of the assembly, you need to be someone with a good decade of experience under your belt to hit the ground running. We’ve had good nuts-and-bolts mayors in the past who couldn’t inspire people. This mayor can inspire, but we still need someone who can do the nuts and bolts. We shouldn’t have to choose between the two.

In 2008, you and Mayor Villaraigosa announced a plan to make the city more business friendly by slashing from 12 to 2 the number of city agencies a new business needs to deal with. But the plan never went anywhere. What happened?
As mayor, I could implement this quickly. As councilmember, all I could do was introduce legislation. We did not see the follow-through from this administration. Period.

When was the last time you took public transportation?
Probably two weeks ago. Expo Line to Culver City and back downtown. To see the city and not have to worry about the traffic? It was awesome.

For a meal out, El Conquistador or El Compadre?
Well, El Compadre is a hangout of ours. The margaritas there are an L.A. treasure.

You’ve been in office for more than ten years, and you’re barely over 40. If you don’t win the mayor’s race, do you see yourself still being a politician or having a different future?
I see myself first and foremost as an Angeleno. It is not my lifelong dream to be a politician. I haven’t dreamed of being mayor for 20 years. I haven’t had my eyes set on higher office. It’s a very demanding job. I’m in this race to win it. And I hope to be the mayor for the next decade. But I also know who I am.