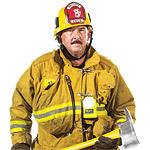 ➻ “It started for me when I was seven years old and had my tonsils out. My mom went into the Northridge Hospital gift shop and got me this little fire engine that had a wagon battery with a pump that squirted water.”

➻ Koneval, 56, joined the Los Angeles Fire Department on February 10, 1980. As a firefighter and emergency medical technician, he’s often called upon to address the immediate needs of people on the scene. Koneval’s goal is to keep victims alive before they’re transferred to a medical facility.

➻ “I don’t remember the nature of my first call. It was a structure response—it turned out to be a small fire. I just remember my ear-to-ear grin. I thought, ‘This is great.’ ”

➻ “I was a framing contractor, in business with my dad, before I became a fireman. He couldn’t understand why I would want to do that. He felt like I was abandoning him. Afterward he felt it was a good thing.”

➻ When Koneval started out, fire trucks had open cabs, breathing apparatuses were not required, building codes were looser, and smoke detectors weren’t mandated in homes. To protect themselves from smoke inhalation, firefighters breathed into their coats.

➻ The term “first responder” was first used in the Los Angeles Times in 1979.

➻ The Los Angeles Fire Department was formed in 1886. Today it has 106 fire stations and roughly 3,500 members.

➻ “We were doing triage. But for the two companies that did fire fighting, it was actually interior fire fighting—like in a house—because the plane landed on the twin turbo propeller and burst its fuel cells.”

➻ In September Koneval received a Medal of Valor from the Los Angeles Fire Department for his actions at the scene of the 2008 Chatsworth train collision, in which 25 passengers were killed and 135 injured.

➻ “Pulling into the fire station that day, I had this feeling that we actually made a difference for some people. I was elated to be able to do something.”

➻ “An adrenaline rush for me is when there’s a ripping structure fire and I’m cuting a hole in a roof—things are happening.”

How to Help Woolsey Fire First Responders (and How Not To)

A New LAFD Unit Is Providing Urgent Care on the Spot