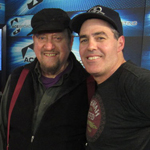 Think of podcasts as talk radio programs on demand. You can listen to the digital files live as they’re streamed or find shows after they’ve been uploaded and archived on Web sites or iTunes. Most can be enjoyed for free, but should you get hooked on a host, you can subscribe for a fee, and new content will be automatically updated and stored on your computer (similar to a DVR). Since anybody with a laptop, a microphone, and a Web connection can create one, thousands of individual podcasts and entire networks cover every imaginable subject, from scrapbooking to witchcraft. Locally, comedy, science, art, and culture lead the pack.

The Myth Buster
Do you have to wait 30 minutes to swim after eating? Did Amelia Earhart live out the rest of her days on an island in the South Pacific? Is the Abominable Snowman real? In 2006, Orange County computer scientist Brian Dunning launched Skeptoid (where “no topic is sacred”) to answer these and other oft-asked questions. He offers succinct analyses and scholarly research that debunk conspiracy theories, consumer frauds, urban legends, and pseudoscience. » New episodes are released Tuesdays.

The Drunk Oprah
Elizabeth Laime of Totally Laime likens her interviewing style to Oprah’s—“if Oprah were a 30-year-old comedy writer living in Los Angeles. And Caucasian. Who’s usually drunk.” Her approach is disarming, and guests (usually fellow comedians) play along during the program she hosts with her husband, “Psychic Andy.” » New episodes are released weekly (days vary).

The Geek Lover
Trekkies and other hard-core sci-fi aficionados aren’t always thought of as the coolest kids on the playground. But TV personality Chris Hardwick has turned his dorkiness into an empire. His Nerdist is a cultural patchwork that covers music, art, books, and science; it’s also where you can listen to Hardwick’s podcast, which he describes as “basically just me talking about stuff and things with my two nerdy friends Jonah Ray and Matt Mira and usually someone more famous than all of us.” Those more distinguished guests have included Conan O’Brien, J.J. Abrams, and Zooey Deschanel. You can find programs hosted by dozens of others on the network as well, such as Sex Nerd Sandra, with sex educator Sandra Daugherty, and You Made It Weird, with comedian Pete Holmes. » New episodes are released weekly (days vary).

The Rage Rover
No one does the rant better than Adam Carolla, and on The Adam Carolla Show the North Hollywood native presents a digital version of his old radio broadcast. There’s a newscaster sidekick, an engineer, and franchise bits such as “This Week in Rage.” Pornographer Larry Flynt and radio show ethicist Dennis Prager have appeared among the guests, who function as sounding boards for Carolla’s invective, which is as tasty as a Double-Double with fries. » New episodes are released weekdays.

The Girl in The Boys Club
You may remember Aisha Tyler for her smackdown delivery when she hosted Talk Soup. The comic now sounds off with Girl on Guy, in which she rips and riffs with guests on “stuff guys love” (“comic books, small-batch spirits, blowing sh*t up”) and a subject she’s familiar with: video games. Tyler matches wits with the likes of writer Dave Eggers, musician Tom Morello, and fellow comedian Margaret Cho on topics ranging from “trolling in Hong Kong” to the “optimal method for punching feral teens.” Bonus: Her show features music by indie rock bands such as Bon Iver and Audioslave. » New episodes are released weekly (days vary).

The Banter Buddies
Anyone who can summon a chuckle from a well-timed movie quote might think they could replicate the success that actor Seth Romatelli and musician Jonathan Larroquette (son of actor John) have experienced with Uhh Yeah Dude. The fact is, filling up to 95 minutes with listenable conversation—no guests, no music, no commercials—is no small task. The likable duo keep pop culture and recent headlines, like the Burning Man lottery and Prozac babies, in their crosshairs as they swap anecdotes and observations. » New episodes are released weekly (days vary).

The Variety-Hour Host
Dana Gould spent 6 years writing for The Simpsons and 20 years making people laugh on Roseanne, Seinfeld, and Mad TV. His recently launched The Dana Gould Hour mixes written sketches and unscripted repartee with funny friends and is formatted like a radio play, complete with interstitial music and announcements. The program might include discussions running the gamut from Charles Manson to Larry King and shtick such as a dramatic reading from a book about sideshow freaks. » New episodes are released weekly (days vary).

The Inquisitor
Stand-up comic and misanthrope Marc Maron brings his acerbic humor and penchant for brutal self-evaluation to the long-form interview. The host of WTF with Marc Maron forgoes fluffy questions and sometimes clashes with guests. Earlier this year comedian Todd Glass came out on Maron’s show, fighting back tears as he explained how the recent suicides of gay teens led to his decision. Maron’s guests are often comedy veterans (Bill Maher, Jimmy Kimmel, Steven Wright, Janeane Garofalo), but he also trades quips with screenwriters, musicians, and whoever else piques his interest. Diablo Cody, Jon Hamm, and Anthony Bourdain have all dropped into Maron’s Highland Park garage, where the shows are recorded. » New episodes are released Sundays and Thursdays.