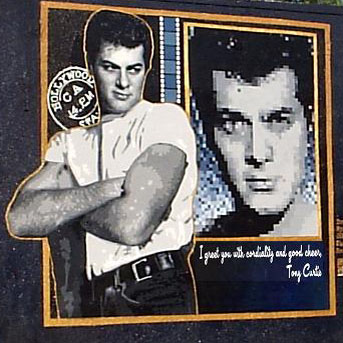 For the past sixteen years, drivers on the southbound Hollywood freeway were treated to a mosaic-style mural of the actor Tony Curtis. This image of Curtis, who passed away last year, will be packing up and leaving tomorrow morning. In his place will be a nice new coat of Caltrans greige. This is the last undisturbed mural along a stretch of the 101 that once had maybe a dozen or more. Whittier artist George Sportelli, who has also painted Johnny Cash, Charles Bronson and Frank Sinatra on Hollywood walls, created the paint-on-concrete work. Sportelli is relocating the artwork to the exterior of Liquor to Go-Go on the corner of Hollywood Boulevard and Bronson. “The freeway is the stupidest place for a mural” says the 40-year-old artist “Tomorrow is the last day I’m going down that frickin’ overpass. What a pain in the ass.”  The mural is one of the only freeway artworks to survive unscathed for so long. Sportelli has cleaned and maintained the mural at his own expense since day one. Years of retouching created a mural several layers thick that the artist has been peeling off this week. “Some of these artists say it takes $50,000 to move one of these murals. I did it with a five dollar scraper.” He will be alongside the 101 at 8 a.m. Saturday removing the last of the piece, which the subject loved and visited frequently. The new mural on Bronson is a replica (which replaced Johnny Cash, (since repainted on Las Palmas) and the original piece is going to a horse rescue outside of Las Vegas that Curtis ran with his wife Jill. “She sponsored the new one.” Said Sportelli “So she gets the old one.” Supplies for the new mural cost about $1500. Wells Fargo paid for new but temporary replicas of four lost murals (including Curtis) printed on plastic sheets and hung along the freeway by CalTrans, at a cost of more than $35,000.