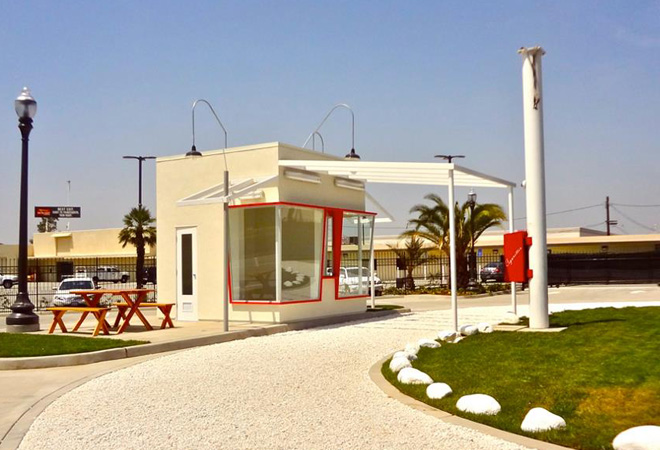 My old pal Charles Phoenix snapped this photo in Baldwin Park recently. It appears to be a replica of Harry and Esther Snyder’s original In-N-Out store #1 opened in 1948. Dig that vintage red cigarette machine! This site was long home to the relocated and remodeled store #1 which was replaced with a new splashy restaurant and In-N-Out University down the block. The relocated and remodeled version of store #1 (The 10 freeway wiped out the original in the 1950’s) was demolished two years ago and the company said at the time that they were planning a museum for the site. That’s what this smells like.  The original neon sign (shown here behind president Lynsi Snyder) is displayed in the university building and I’m guessing it will make its way back to this location.  Los Angeles magazine ran a big feature on L.A.’s favorite burger stand in 2004. Drive immediately to your nearest In-N-Out, place your order and then click here to read the story in your car.