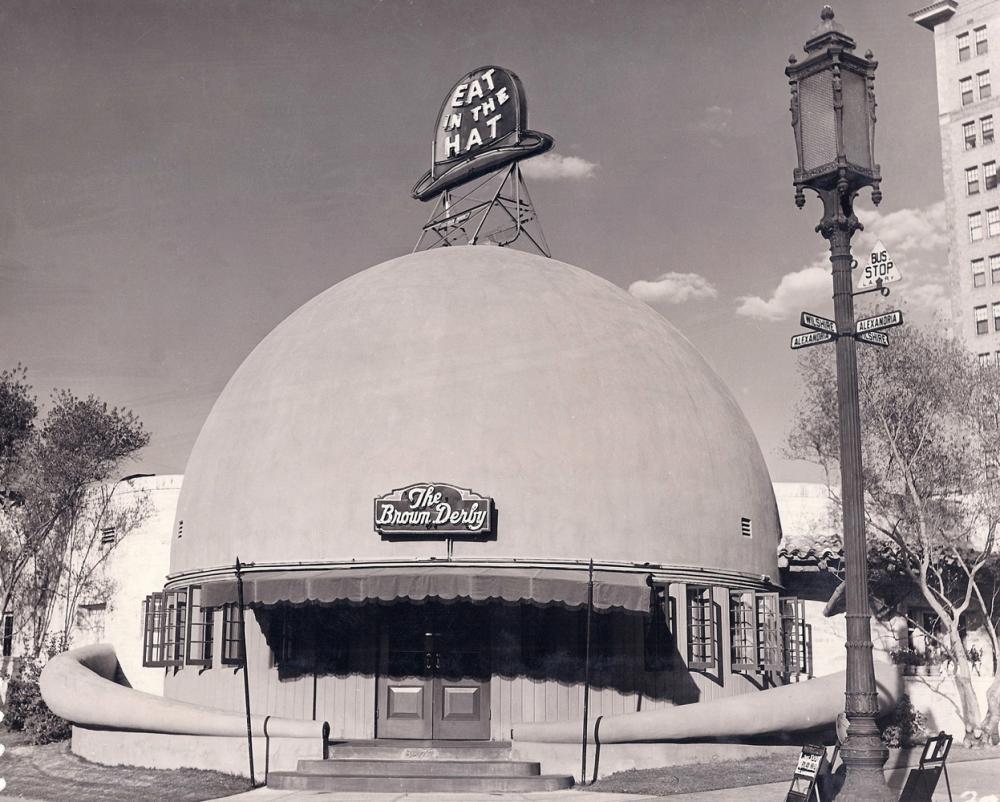 Some of our favorite places from old Los Angeles exist only in postcards and stories, but here are a few long-gone places lost a generation ago that memorialize what came before.

You might know the Pan Pacific from its role as the snazzy roller disco from Olivia Newton John’s Xanadu, but the streamline moderne hall also housed the Ice Capades, Motorama and 9000 screaming teenagers for Elvis Presley’s 1957 appearance there.  The building burned in a spectacular 1989 fire. A recreation center there today honors it with a replica of its famous pylon.

The hotel pantry was infamous as the place where Senator Robert F. Kennedy was assassinated in 1968, but for decades the hotel was a joyous palace that hosted the Academy Awards, the celebrity-filled Cocoanut Grove nightclub and endless birthdays, proms and anniversaries. The hotel closed in 1989 and was a popular filming location before being demolished by the LA Unified School District for the new RFK High School opened in 2010. A fountain, pylon and some artwork remain from the old hotel in a new park along Wilshire Boulevard.

This quirky hat-shaped restaurant was started by Gloria Swanson’s husband and quickly became a celebrity hangout in part because of its location across the street from the Ambassador Hotel. Tourists would come to gawk at stars and dine on grapefruit cake. The Hollywood location boasted caricatures of their celebrity clientele on almost every wall, but this is where it all began. Walt Disney World built a replica in Florida that still serves their specialties.  The original Wilshire Derby was picked up and placed atop a mini mall in the 1980s where it remains today as a Koreatown bar called The Red.

This gigantic oceanarium opened in 1954, a year before Disneyland, and was home to dolphins sharks and killer whales that performed for generations of Angelenos. TV shows ranging from The Munsters to the A-Team were filmed there. Lucille ball fell into a tank for The Lucy Show. In the 1970s the park got a Hanna-Barbera overlay and finally closed in 1987. The empty park remained a filming location, home to The Aviator, Charlie’s Angels and three Pirates of the Caribbean movies. The spectacular site is now the Terranea resort and an adjacent park houses a display with a tribute to Marineland.